Since ancient times, royal jelly has been a well-kept secret of youth and longevity, reserved only for monarchs of old. However, royal jelly holds many other mysteries …

Let’s go discover them together!

Royal jelly through the ages …

The history of royal jelly through ages is very ancient and rich. In ancient Egypt, royal jelly was used as a cosmetic product that reached the peak of its popularity during the reign of Cleopatra, to whom it was the ultimate secret of beauty. In addition to being a symbol of strength, youth and immortality among the Pharaohs, in Asia, and more specifically in China, it has been used in traditional medicine since ancient times. This product of the hive, found exclusively in the sovereign gardens of the Forbidden City, was correlated with longevity and sex drive, even in old age, for the ancient dynasties of China. In more modern times, the late Lady Diana (Princess of Wales) and Queen Elizabeth used it to reduce the effects of fatigue and boost energy.

The 5 essential secrets of royal jelly … 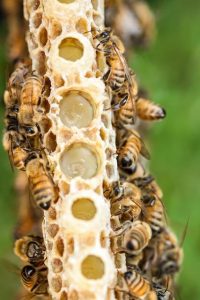 Bees on a piece of honeycomb

Royal jelly is a functional food that serves as a staple ingredient in a variety of pharmaceuticals. Antioxidant, anti-inflammatory, antitumor, antimicrobial, antihypercholesterolemic, vasodilator and hypotensive, are the properties of this miraculous remedy. This is because royal jelly has been widely used to treat several health conditions such as diabetes , cardiovascular disease, and cancer .

Studies have shown that royal jelly has properties that can stop the growth of cancerous tumors and destroy them. Beehive products, in general, help control tumor growth and the appearance of metastasis, according to the survey.

1) A secret of longevity:

Aging is inevitable for all living beings. For humans, it is associated with the gradual reduction in overall functioning and an increasing risk of mortality due to the risk of various age-related diseases. Therefore, researchers are under pressure to find effective natural solutions that can slow down this degradation, or that could ensure healthy aging and extend lifespans. Royal jelly is a liquid substance that queen bees drink and feed on throughout their lives. Thanks to this special wax, queen bees enjoy excellent reproductive functions and an extended life span compared to workers, despite having the same genome.

This gelatinous substance contains an abundance of natural hormones necessary for the normal functioning of the body. It is rich in vitamins A, C and E, all associated with healthy and glowing skin. It contains 20 amino acids as well as fatty acids, sugars, and important proteins such as arginine, which is vital for cardiovascular health, and lysine, which is associated with low cholesterol, fat metabolism and fat loss.

The gelatin in royal jelly is also associated with the production of collagen and can be another factor in maintaining a youthful appearance.

How to increase immunity naturally? The answer is royal jelly! It can improve your body’s natural immune response to foreign bacteria and viruses. The fatty acids in this cure are known to promote antibacterial activity, which can reduce the incidence of infections and support immune functions.

Royal jelly is known to reduce inflammation and oxidative stress. According to studies and to experiences on animals, specific amino acids, fatty acids, and phenolic compounds found in this secretion appear to have potent antioxidant effects. Also, they show reduced levels of pro-inflammatory chemicals released by immune cells treated with royal jelly.

4) The stress reliever of choice:

Numerous studies have shown that royal jelly, in addition to helping to improve cognitive functions, has both neuroprotective effects serving to preserve and strengthen memory and neurotrophic effects contributing to the growth and maintenance of neurons. The oral administration of royal jelly had beneficial effects on the animals studied. In addition to strengthening spatial memory, this substance also reduced neurodegeneration and oxidative stress while increasing the proliferation of new neurons in the hippocampus.

Royal jelly boosts testosterone levels in men who consume it regularly and improves semen quality. Royal jelly has also been shown to have a positive impact on the FSH / LH ratio, however, this effect is reversible upon discontinuation of supplementation. Royal jelly also increases libido and Menopausal symptoms. Preliminary research has shown that royal jelly protects against osteoporosis by decreasing bone resorption (anti-osteoclastic).

True, the inference is that it is most often used to boost fertility in women, but it is also taken by men for the purpose of increasing virility, libido and sperm count.

Royal jelly is not only consumed before conception, but also during and after pregnancy. Therefore, RJ is an important estrogen hormone balanced food that can also help support the endocrine system.

Additionally, royal jelly can have estrogen-like effects, which can help women who suffer from low estrogen levels. Of course, we strongly recommend that you consult your healthcare professional before taking this gelatinous substance for fertility, or during pregnancy or breastfeeding.

Honey is a delicious food that comes in many different flavors and colors depending on where it is produced. Due to its high sugar and low water content, as well as its low pH and antimicrobial properties, honey as well as other bee products such as royal jelly can stay fresh for years, decades or even longer.

However, under certain circumstances, they can rot or lose their appeal. Honey and royal jelly can be contaminated with bacteria, yeasts, fungi, or molds, although they usually do not reproduce in significant numbers.

They can also contain toxic compounds from certain plants or be adulterated with sweeteners or poor processing. Additionally, improperly stored bee products will not last as long. Therefore, it is important to keep them sealed in a cool and dry place. By purchasing them from reputable suppliers and storing them properly, they can be enjoyed safely for many years to come.

The benefits of royal jelly and beehive products in general are numerous! So start considering including them in your diet more often!

zinc: 5 foods that are rich of it

stretch marks: how to prevent with 5 products