Vanilla is an ingredient that fascinates us all, thanks to its magnificent smell that makes us want to enjoy the recipes prepared with it. It has succeeded to convince us to use it as a flavoring in the preparation of many delicious dishes such as custard, crème brûlée or the famous vanilla ice cream.

Eager to know the benefits of this plant ?

Where does vanilla come from? 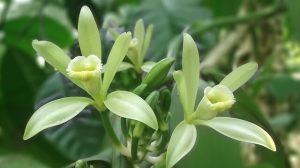 Close up of the vanilla flower while still green

Vanilla comes in the form of the flavoring substance produced from the pods of a species of tropical climbing orchids. The unripe dried fruits of Mexican or Bourbon vanilla (Vanilla planifolia), Tahitian vanilla (Vanilla tahitensis) and occasionally West Indian vanilla (Vanilla pompona) are vanilla pods ; All three species are believed to be descended from a single species native to Mexico, Central America, and northern South America.

This plant was used to flavor xocoatl, the Aztec chocolate drink, millennia before Hernán Cortés drank it at the Montezuma court, and it became popular in Europe soon after. It is now widely used in a variety of foods and sugary drinks, including chocolate, confectionery, ice cream and baked goods, as well as in perfumery.

Vanilla plants feature a long, fleshy climbing stem with aerial rootlets that cling to trees, as well as roots that reach the ground. During the flowering season, which lasts about two months, a large number of flowers open one by one and only last for one day.

Due to their delicate structure, only a few small bees can naturally pollinate flowers; in places where pollinators are few, the flowers are artificially pollinated with a wooden needle as soon as they are opened. The color of the flowers varies from pale green to yellow to creamy white. The long, capsule-shaped fruit reaches a total length of about 20 cm in four to six weeks, but ripening can take up to nine months. Unripe pods are picked up when they turn a golden green color at the base.

How is it prepared? 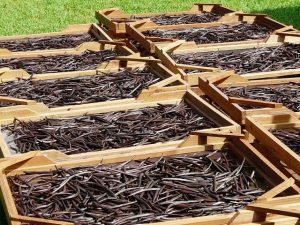 Fresh vanilla pods , sometimes called “beans”, have no smell. The distinctive scent is the product of enzymatic action during the curing process. The traditional procedure begins with sweating the collected beans each night and exposing them to the sun every day for about 10 days, until they turn a dark chocolate brown color.

The beans are then placed on trays in a ventilated shelter until they are dry enough to be classified and packaged. Four to five months are required for hardening and drying. The best dried seed kernels are concentrated with microscopic vanillin crystals, which give them their distinctive rich and sweet aroma . Frost, a type of coating, can be used as an indicator of quality.

7 virtues and benefits of vanilla

A natural antidepressant and stress reducer. It soothes, calms, expands and expands the body and mind in the same way as chocolate. It is used to treat episodes of panic, hysteria, and bereavement.

It simulates the neurological system, relieves tension and improves memory and attention.

A natural aphrodisiac because its scent and taste stimulates libido. It is the main component of love filters in various cultures, when combined with alcohol.

Thanks to its richness in polyphenols, it can help to prevent cell aging. It rejuvenates and restructures the skin. This is also why it is so popular in cosmetics.

It has also got an antibacterial properties. It soothes animal stings and bites. It would again be used as a stand-alone drug in various cultures.

It naturally contains sugar, so it can be used to make yogurts, cookies, sherbets, ice cream, candies and pastries!

It promotes hunger and improves digestion, besides having a wonderful flavor.

Vanilla, one component, many forms

It is mainly known for its divine taste but it can also be used in several other forms:

Superfoods are 100% natural foods that have high nutritional value and offer a variety of health benefits. These nutritional qualities are linked to the amount of nutrients in the food, which allows it to meet the needs of journalists. Superfoods can thus be used as the basis of a healthy diet or to supplement key nutrients that are deficient. 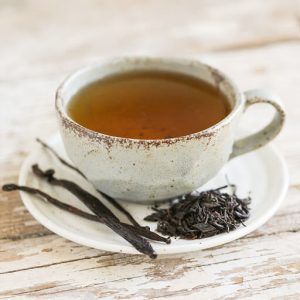 Herbal tea and inf usion are an easy and convenient way to experience the health benefits of herbal medicines. This involves extracting aromatic chemicals from plants using various processes including maceration, decoction or infusion of plant material (fresh or dried flowers, stems, roots or leaves) in Hot water.

Example of herbal tea and infusion that contain vanilla :

4- Other products with Vanilla extracts:

We all have memories with the delicious flavor of vanilla and its irresistible aroma, that scent that pleases our hearts and brings us back to the childhood days when we ate wonderful tasting cakes that we all loved.

What about you, do you like products with vanilla?