4 agave health benefits you must know

As Leonardo da Vinci said many years ago: Nothing deceives us as much as our judgment. This is exactly what happens to us when we look at agave, this plant in the form of a flower with fleshy leaves, loaded with sharp teeth ending in a prickly thorn that is quite hurtful to the touch.

All the indications we have mentioned above can only persuade us that this is a plant that should be avoided and left aside since there are thousands and thousands of other sweet, colorful and beautiful plants that give us a feeling of security and confidence.

After this article you will certainly change your mind!

First of all, agave is a plant of the Asparagaceae family, native to the American continent, more precisely Mexico, but it can also be found in the southwestern regions of the United States of Central and South America.

Its syrup, which can also be called “Agave Nectar”, is a soft liquid with a lower viscosity than honey. It comes mainly from the heart of the plant when it reaches an age of between seven and ten years, the sap that is found there is extracted, boiled and then concentrated into a liquid syrup.

Indeed, this product is a huge success with athletes around the world, who must respect a healthy diet and quality have opted for agave to satisfy their need.

Let’s find out what are the advantages of agave?

Agave, a good source of minerals 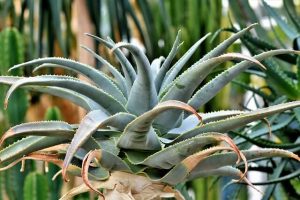 Agave is a main source for minerals. Mineral salts and vitamins are at the top of the list of the main components of agave syrup. It is rich in:

Since the texture and color are major points in common between honey and agave, the latter can take its place on your table. As long as agave syrup has a vegetable source, it will undoubtedly be the first choice of people who have adopted a vegetarian diet that ensures a life free of obesity, cardiovascular problems and cancer.

Besides, to give a sweet touch to your dishes while keeping a healthy nutritional value, we tend to add honey, but the biotona agave syrup sweeter with a lower glycemic index is a competitor;

This one, surpassing white sugar in the race of foods with high sweetness power, has a fascinating advantage: half a spoon of syrup is equivalent to a spoon of sugar. This means less calories in your diet.

It should be noted that there is an alternative in the form of agave sugar powder, which is ideal in smoothies, yogurt, pastries, fruit breads, muesli and other recipes. It can be introduced into baby food to boost immunity and ensure healthy nutrition.

Since it is rich in flavonoids, (also called vitamin P), which is an antioxidant substance, agave is favorable in terms of protection against cardiovascular diseases that affect the heart and blood vessels, and which affect in most cases the population categories generally characterized by a fairly polluted lifestyle, poor in physical activity and rich in alcohol consumption and tobacco.

People who suffer from high blood pressure must absolutely find a solution, no need to look too hard, the solution is in this article;

A study conducted in New York showed that the analyzes of patients with high blood pressure have low levels of flavonoids. We can only conclude that drinking an almond agave drink as an example is an essential natural remedy. Just shake it well before opening and do not exceed five days after opening.

With the change in weather or after eating a food that causes you a food allergy you may experience some unpleasant symptoms such as cough, runny nose, sticky eyes or indigestion. However, you can now turn to agave, which, as an anti-inflammatory, can reduce and soothe these seasonal and food allergy symptoms, as well as asthmatic and skin reactions.

Close up of green agave plant

Agave syrup or agave nectar has antibacterial properties that have been used since ancient times by the Aztecs, a Native American people settled in the central plateau of Mexico.

They used it for the treatment of infections and skin diseases from the moment it is able to capture water and make it fix in the skin or in the hair whatever their type (dry, fat, thin, thick, curly, smooth …) , it has the advantage of bringing them a flexibility and a natural hydration.

Back to the subject of the skin, in addition to its antibacterial properties, agave suitable for dry and dehydrated skin, can replace a moisturizer, because it has a strong power to make them softer, smoother and cleaner.

After this article, are you convinced of the importance of this plant?