In recent years, dried berries and goji berry juice have become very popular in the West, not least because of their antioxidant content. This popularity is heavily fueled by claims that are well orchestrated marketing rather than well documented data. How not to remain perplexed by reading the following flights: ” The secret of the youth of Tibet”, “Miraculous berries”, “Berries of smile “, etc.

Goji berries , also called goya berries , are the fruits of a small nightshade bush. For thousands of years, Asians have understood and used the herb for its various health benefits. It is indicated to fill specific shortages and to nourish the body with highly critical nutrients as an ultra-complete superfood.

It takes four years for the plant to produce fruit with the highest concentration of nutrients. The fruits appear from August to October after flowering between June and September. Freshly picked fruits and vegetables, like all fruits and vegetables, are best. Unfortunately, exporting this product while it is still fresh is prohibited by local law.

A little bit of history …

Goji berries have been consumed in China for over 2000 years. The fruit has the properties of ” nourishing the kidneys and the liver “, “moistening the lungs” and “supplementing the Yin”, according to traditional Chinese medicine.

Goji extract made from goji berries can be purchased to get the most out of the natural benefits. This ensures that it retains all of its basic qualities. This allows you to get concentrated goji extract in capsule form, which is the best way to get a high concentration of active components.

It is used by Chinese herbalists to treat male infertility, respiratory problems, and fatigue, among others. They use it as a tonic to strengthen the immune system and protect the liver and kidneys from the effects of aging, as well as to preserve the integrity of neurological functions and organs of sight.

Benefits for your health

The goji berry is a superfood due to its high content of antioxidants. It would even be the most powerful natural meal rich in antioxidants on the planet! The high concentration of vitamin C in this small berry also makes it an excellent anti-fatigue treatment.

Antioxidants are particularly powerful in stimulating the immune system and activating the body’s natural defenses against infections and disorders, in addition to their effect on free radicals. The high vitamin and mineral content of the goji berry makes it an excellent diet for preventing minor deficits. Due to its high concentration of calcium, it is very good for preventing osteoporosis. Finally, the goji berry has been found to be helpful in lowering cholesterol, blood sugar, and blood pressure.

Its antioxidant properties also benefit skin cells, allowing them to stay younger, softer and smoother. As a result, the goji berry has earned the nickname “Fruit of Endless Youth“!

Goji berries are very useful in compensating for deficits, which are usually associated with weight reduction programs, as they are high in fiber, protein and have a low glycemic index. 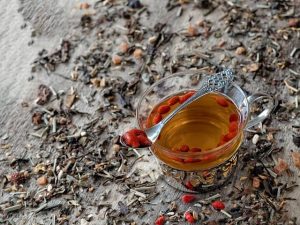 Teacup with goji berries infused tea in it

Goji berries can also be used to make a detoxifying and regenerating herbal tea. Various minerals and trace elements, as well as vitamins and antioxidants, will migrate into the water, offering it many benefits as well as a purifying effect.

People with diabetes who took a supplement made from a specific carbohydrate from the goji berry twice a day for three months had lower blood sugar levels than a control group, according to a small test. More research is needed to determine its usefulness, as well as whether the fruit alone would be effective in lowering blood sugar.

Goji is sometimes used in traditional Chinese medicine to prevent cancer, and cell research shows it has anti-cancer properties. Although goji cannot prevent or treat cancer on its own, preliminary research suggests that certain substances in it may help reduce the spread of certain breast cancer cells.

Goji berries: how to use them ? 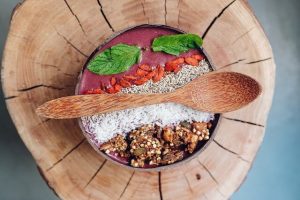 Goji berries come in a variety of forms, including dried fruit, juice, and powder. To benefit the immune system or chronic fatigue, we recommend consuming 10-20g of dried goji berries per day. We can consume up to 35g of goji berries every day to lower cholesterol, blood pressure and blood sugar.

Here are some products and ideas on how you could include fruit in your meals and snacks:

Goji berries are great for breakfast, especially when combined with other super foods, added to muesli, sprinkled on pastries, fruit salads and puddings, or eaten plain as a potent snack and energizing. Combine Goji berries with fruit (juice) or other super foods in smoothies and shakes, or just in (vegetable) milk, yogurt or a little water. Don’t be afraid to try new things in the kitchen to make your kitchen healthier.

Goji berry powder, which is freeze-dried, can be used in yogurts, cereals, and smoothies.

Is a combination of several dried berries (as well as goji berries) which can be added to your muesli, yogurt or smoothie, we can mention some examples as follows:

After learning about all the health benefits of this Asian fruit, we invite you to share with us how you like to consume it and the benefits you are most interested in, which encouraged you to incorporate it into your eating habits.

zinc: 5 foods that are rich of it

END_OF_DOCUMENT_TOKEN_TO_BE_REPLACED

stretch marks: how to prevent with 5 products